Started the day much the same as the previous one. Chatted to Roger Stone over breakfast, who told some anecdotes about his father and his own encounter with Liam Clancy, which involved the telling of an unprintable joke. His Father was apparently a great singer and storyteller. One of his father’s old wind ups was if somebody asked him what kind of dog he had he’d say “It’s a blacksmith hound – every time you kick it up the arse it makes a bolt for the door.”

Then Jim arrived on the scene. Jim would be our driver for the day. “How are you Jim?” Roger asked. To which Jim replied, “Oh can’t complain, no one would listen” and then broke into a mischievous grin. Jim is seventy-one years old. A couple of years ago, after one of the artists got too drunk and made a fool of himself, Jim was blamed for giving them moonshine. Everyone else had Jim’s back in that situation but the moonshine supply curiously dried up.

As we drive along Jim tells us about the hunting and fishing in the area much like Fred had on the previous days drive but with more swearing and bursts of roguish laughter. It quickly becomes evident that Jim is a very enthusiastic hunter. If it has four legs and it lives in the woods Jim has killed, skinned and eaten it. It’s hard to know how to feel about someone having killed and eaten bears but Jim just is what he is. It’s hard not to like him. Apparently bear hunting is not heavily regulated but you need a license to hunt moose. A mature bull moose can weigh a thousand pounds he says and if you hit one with your car at a hundred miles an hour you’d be done for but the moose would probably walk away. He said it was very unlikely that we would see a moose where we were going though. He tells us a lot about the local mushrooms too like chaga, chanterelle and Portobello and how he uses tree sap to make a salve for sore muscles.

Next he gets on to tell us that he’s been driving for Celtic Colors for twenty-one out of twenty two years. Apparently the Celtic Colors drivers have collectively put in a million miles over the lifespan of the festival and never had one accident. But that’s not all. Jim drives for music venues in the area too. He’s driven Snoop Dog and Steve Tyler from Aerosmith whom he describes as ‘a card’.

When we reach the venue J.P. Cormier and Ray Lagere are sound checking. These guys are the headline act of the evening. They’re a bluegrass duo and they play about a million notes a minute. They’re really incredible players. There’s a radio show and then a televised Bingo program broadcast from the upstairs of the venue so we sit downstairs and listen to the other act sound checking.

Brìghde Chaimbeul and Ross Ainslie play the small pipes and their music is a mixture of traditional Scottish tunes, contemporary tunes and a few Bulgarian tunes, which Brìghde learned on a tune hunting trip she took there. Stephen Byrnes, an accompanist from Waterford who plays bouzouki and guitar, joins them onstage also. 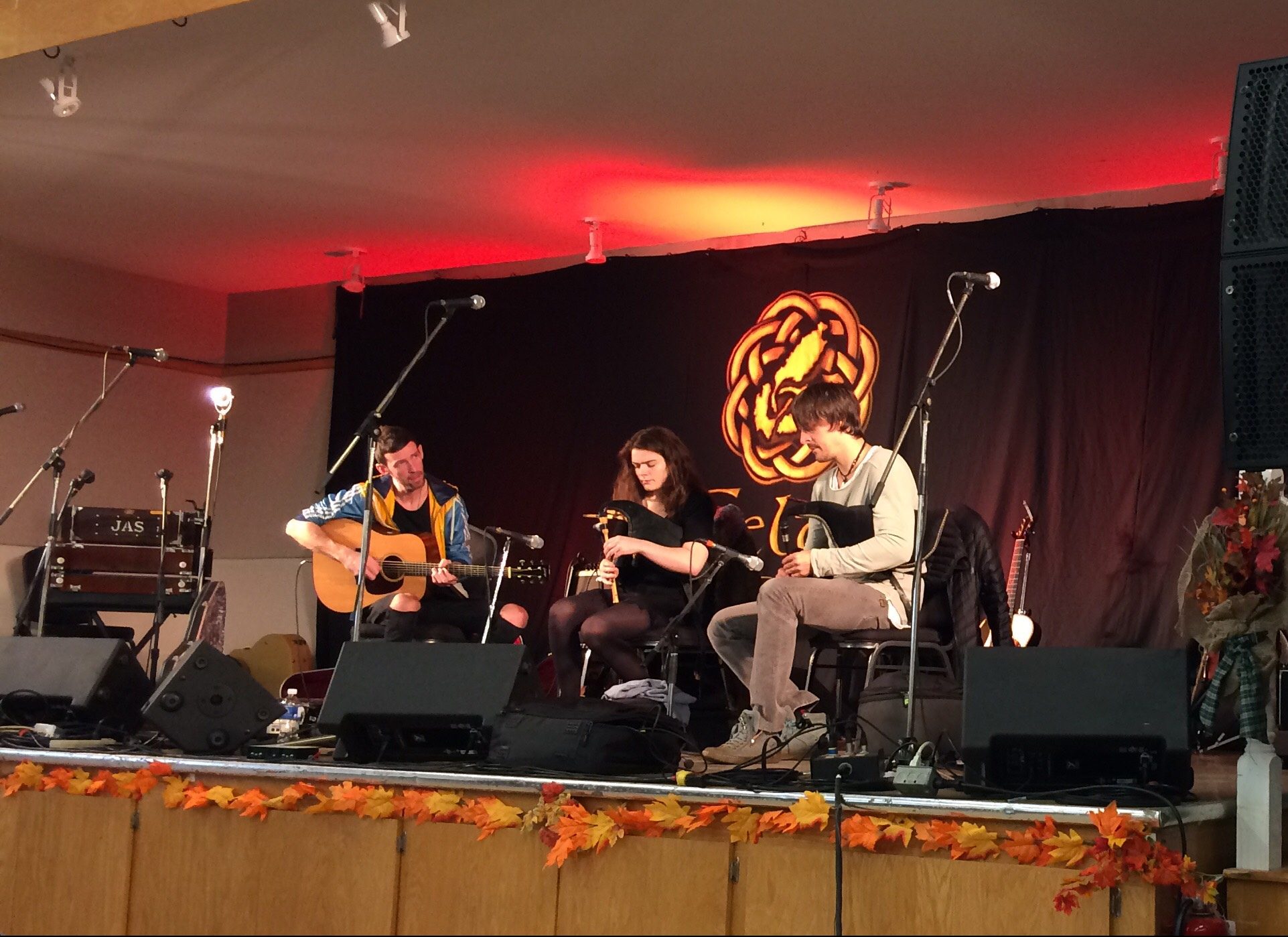 Brìghde is from the Isle of Skye and took up piping at the age of seven. She describes herself as having been really obsessed with piping at the age of nine or ten, rising early to practice for two hours a day before school and listening to solo pipe music on her iPod shuffle.

It’s hard to describe what two sets of small pipes sound like if you’ve never heard them before. Brían describes it as a bit like Scottish Nintendos. This may not sound immediately appealing but it is. When he says this to Brìghde she laughs and recalls the father of a childhood friend asking if she was playing video games when she was locked away in a room for hours at a time. It’s clear when you listen Brìghde’s impeccable sense of rhythm that she didn’t waste a lot of time playing video games as a child. These guys are exceptional musicians. Its an oddly mesmeric style of music that sounds both ancient and modern and you’ll find that the notes seem to keep swirling around in your mind long after the music has stopped, leaving you wanting more.

The gig itself went well and we all took to the stage for the finale which is kind of a Celtic Colors custom and which many people here seem to pronounce ‘finally’. Afterwards we went down to the marina for tea and cake.

It was dark by the time we were leaving. Brían sat up front chatting away to Jim. Alain and I were seated in the back of the car and began to nod off immediately. When the van suddenly slowed down and we heard exclamations of surprise from the front seats we both jolted awake and saw what was happening. A moose had run out into the road ahead of our van and Jim hit the brakes just in time. We came within a few feet of hitting it. Then the startled animal continued to run along in front of the vehicle for a while so we had a good look at it before Jim finally blew the horn and scared it away. We were all in slight shock afterwards and laughed a lot but it gradually dawned on us all that we had been very lucky. Jim told us that it had been a young bull moose and estimated that it might have weighed 600lbs. It doesn’t bear thinking about what might have happened if we had hit it at speed. We were pretty glad afterwards that we hadn’t altered the Celtic Colours perfect record for accident free driving.